Fiercely, they look out across Neude square: the three bright-red, conjoined houses that are home to De Beurs. De Beurs has been serving Utrecht from this spot for 22 years, and since 2017's big renovation, the buildings are looking better than ever. And for good reason: their history reaches back way before the establishment of De Beurs - back to the Dutch Golden Age, in fact. More than enough reason for a trip to the seventeenth century and back. 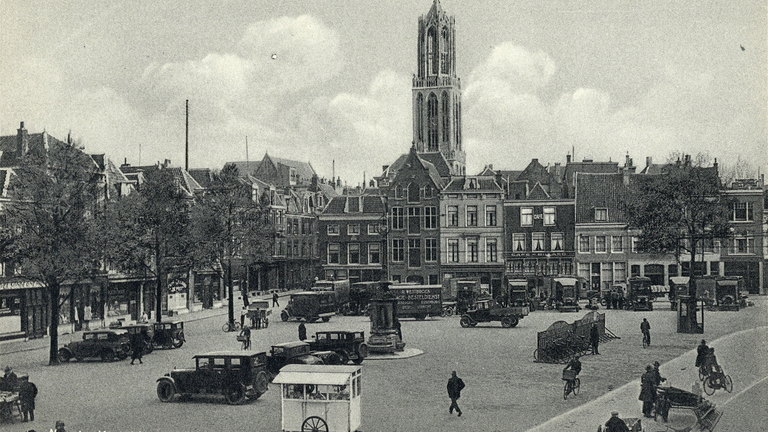 History of the houses

It is the year 1624 when the name ‘’t Glindt’ is first recorded, as far as we know, in the municipal registry of Utrecht. The building bearing that name is located at the corner where Neude meets Schoutenstraat and it is house and workplace at once, as was common in those days. In the back, one would find the family’s living and sleeping quarters and the kitchen, whereas the front room was meant to receive guests and business partners and housed a small ‘comptoir’: the husband’s office. ‘Glindt’ is an old Dutch word meaning ‘fence’ or ‘pen’, but it can also indicated that which is fenced in – in other words, a garden or courtyard. In seems the owners of the house wished a quiet, peaceful place for themselves in the clamorous and not-so-clean seventeenth-century city.

‘t Glindt may be the oldest, but the Zwarte Leeuw (‘Black Lion’) is the highest of the houses of De Beurs, thanks to its pointy gabled roof. The current building replaced an older house around 1880 and was initially a warehouse. In 1904, it came into the possession of the Lammerts van Bueren company, who ran a successful sailmaking business. The hooks they used to suspend their sails can still be seen in the attic, and the imposing loading doors located on every floor remind the visitor of the building’s past as a place of trade – ‘place of trade’ or ‘exchange’ happens to be the meaning of the word ‘Beurs’, too. Coincidentally, it was Lammerts van Bueren who first started painting their business the iconic red that De Beurs still is today.

Lammerts van Bueren – the company still exists – used to be a household name in Utrechts, but the past of the rightmost house that now makes up De Beurs is less well-known. This building, which was added to a much older central part around 1860, was home to the city’s first telephone exchange! The Dutch Bell Telephone Company ran a switchboard here, controlling the conversations held by no less than 163 subscribers. Inside, in what is now De Beurs’ offices, the foundations of their rooftop telephone pole can still be seen. What it’s made of? That other great modern technology of the nineteenth century: the pole was held up by old railroad ties.

Whoever steps through the doors of De Beurs these days will not notice too much of that long history at first glance. A large, modern bar, a glass floor offering a look at the beer tanks, a second floor that seems to float, and all of that within one big open space… But start to look closely, and the old details are still present all across the café. In the left building (‘t Glindt) one might notice the original double floor with its ancient beams and joists, and the cellar – behind the old wooden door on the ground floor – harbours a wealth of centuries old porcelain tiles.

Kitchens around the corner

De Beurs is not actually made up out of three buildings; there is a fourth one running behond them, its façade located at the Schoutenstraat and also painted in the iconic red of the Neude buildings. The oldest parts of this house, which now harbours the kitchens and larder, are known to be medieval – meaning they’re about as old as the city’s famous Dom tower and church. These days, it’s your food that is prepared there, and you can keep an eye on things thanks to the open kitchen setup. Upstairs, out of visitors’ reach, is another big kitchen and a room-sized cooler to keep the food clean and fresh. Bon appétit!

The redesign, conceptualized by De Beurs’ own team and worked out with the help of architect Antoine Pruyn, was carried out with the utmost respect for the buildings’ history. Their heritage is not only visible to those with an eye for history; it will be noticed by anyone in the form of the peaceful, authentic atmosphere of the restaurant. Curious to see for yourself? The door is always open for a cup of coffee or a pint – and to admire those four centuries of history, of course! 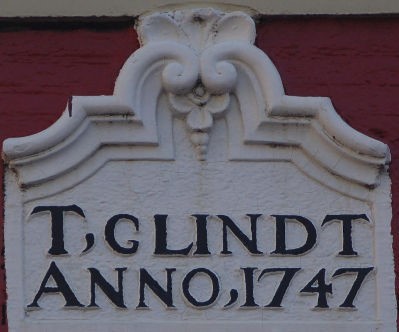 No one knows what sort of business the owner of ‘t Glindt once did, but his heirs certainly became affluent. In 1747, the wooden façade was replaced with stone, and was pushed a couple of meters forward as well. It’s still standing in the same place now, carrying a plaque with the name of the house on it, as is customary in many Dutch cities including Utrecht. 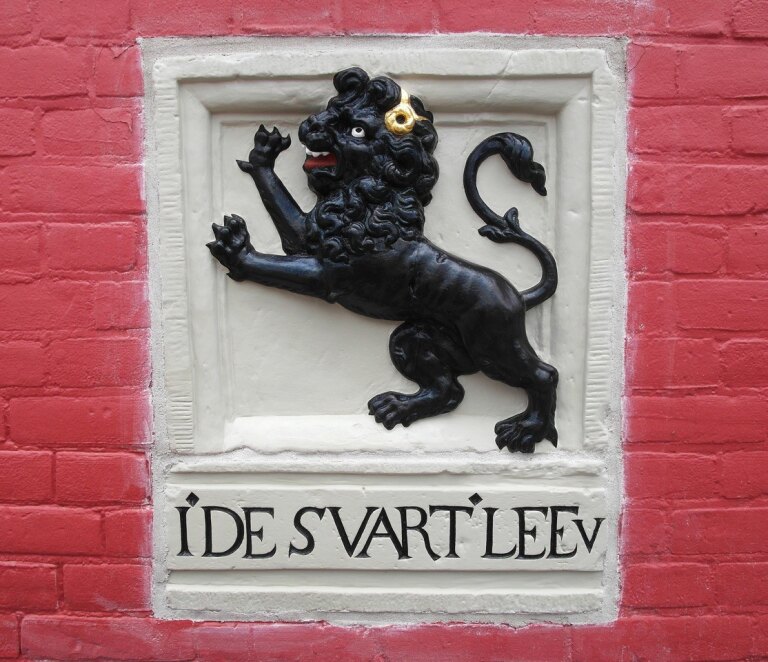 The adventure of the Black Lion

The middle building of De Beurs also carries a plaque, this one reading ‘I’de svart’leeu’. It’s a very archaic spelling of ‘In de Zwarte Leeuw’, which means ‘In the Black Lion’. The plaque must have been ordered by Pauwels Janss. de Leeuw, who built and owned the house that previously occupied the space of the current warehouse. De Leeuw’s homestead was torn down in the nineteenth century and during renovation works to the warehouse in 1904, the old plaque somehow went missing. Or perhaps we should say it went on an adventure? After all, it did eventually turn up again – as a mantelpiece in the historic Blauwkapel fort, situated at the northern edge of the city.

The Black Lion’s safekeepers, as it turned out, were a group of scouts named Charles de Foucauld. They found the plaque in a house in Wijk C – one of the old city’s quarters not too far from De Beurs – that was scheduled for demolition. Fond of the old stone, they took it to their temporary housing in the new Tuindorp district. Charles de Foucauld eventually merged with another group called Willem de Zwijger and moved into new, permanent housing in Blauwkapel, which is not far from Tuindorp. Still, no one knew the origins of the plaque – until, decades later, someone tipped off local archaeologist Maarten van Deventer, who determined that its home was at De Beurs. One thing led to another, and the owner of De Beurs had the plaque renovated and reinstalled on the building’s façade. The scouts were thanked for their good work and rewarded with a replica of the plaque – and so their hearth still looks as stunning as ever, even as the centuries-old Black Lion looks out over Neude square again.